24 May 2017 – Jerusalem’s Old City walls have been illuminated like never before thanks to Epson’s powerful EB-L25000U laser installation projectors, in their most ambitious project yet. As part of one of the most ambitious audio-visual projects ever seen in Israel, twenty projectors have been synchronised to bring 4,500m² of the Old City walls to life with colourful animated imagery, while a hundred illuminated drones form shapes and messages in the sky above.

The project, which is on in action every day between Jaffa Gate and the Habonim Garden, juxtaposes the power of the latest laser projection and drone technology with walls that have stood for nearly five-hundred years, to tell the city’s story using vivid, colourful imagery, in the sort of hot, dusty environment that can prove challenging for projectors.

"When we were approached to take on one of the largest multimedia projects ever staged in Israel, it was clear to us that beyond just imagination, we needed to come up with a whole world of content and ideas that broke existing boundaries, using the last word in new technology,” says Malki Shem-Tov, co-producer and joint CEO of AVS, one of the largest and most specialised multimedia solutions companies in Israel, which provided extensive professional experience and technical capabilities acquired through many major events.

As well as the twenty Epson projectors, and with assistance from  S.A. Systems Ltd., a strategic partner of Epson Israel, AVS deployed six kilometres of optical fibre to transmit the imagery to the projectors, as well as a hundred hubs. "The final result that the people of Israel got to see on the opening night, and will be able to see until mid-July 2017, is the result of over two months’ intensive planning," says Lee Harrison, development manager for Epson Europe's professional displays division, who went to Israel to oversee and provide advice in staging this massive project.

"The AVS team, led by joint CEO and technical director, Assaf Shem-Tov, chose the EB-L25000U, Epson’s most powerful and advanced laser projector, which has brought Epson into a whole new era in large scale fixed projection," continues Harrison. “Our new flagship projector, which is already being used for conferences, outdoor events and large-scale shows around the world, is lighter and smaller than competing models¹, yet offers a very powerful light source of 25,000 lumens. It’s also extremely tough and very resistant to environmental hazards, which is vital when required to work non-stop in the 35-degree heat and dust we find in Jerusalem.”

A durable solution for the toughest environments

According to Oren Fleisher, CEO of Epson Israel, the new laser projectors are marking a substantial leap forward in performance, and reinforce the company's position as number one in the projection market. He says, "Epson has been named by Futuresource² as the world's number one projector manufacturer. This market leadership, especially with competition from all directions, is not something we take for granted. Part of our success lies in being leaders in global innovation as well. Our aim, as exemplified by this project, is to take something that no one thought was possible, and for which no solution has been found, and to be the catalyst that takes that solution a step further, while listening to exactly what our customers want.”

The durable, reliable EB-L25000U proved perfectly suitable for the hot, dusty environment it was asked to perform in, and also proved easy to install, thanks to an optimised cooling system that permits the projector to be installed at, and project from, any angle, and a sturdy tube frame and base plate structure that prevents damage from knocks in transit and mounting. On top of that, a sealed optical unit and inorganic phosphor wheel construction provide 20,000 hours of reliable operation³ without the need for maintenance, meaning the organisers of festivals such as these can 'fit and forget', reassured that they'll get non-stop, worry-free performance.

² Largest unit share of the market for 500 lumen and higher projectors. Survey conducted by Futuresource Consulting Limited for the period from 2001 to 2016.

³ Approximate time until brightness decreases 50% from first usage. Measured by acceleration test assuming use of 0.04 - 0.20 mg/m3 of particulate matter. Time varies depending on usage conditions and environments. 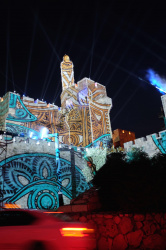 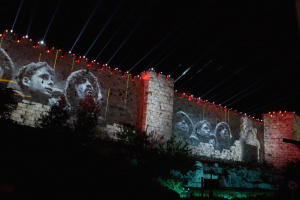 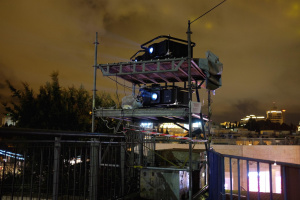 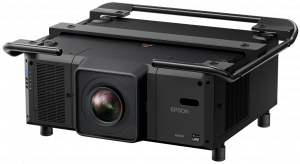