How will technology change business?

European workers are unclear about the impacts of technology on business, and want companies to start preparing them now for changes to come

Technology is driving a revolution in how we work. Like any revolution, its perception by those it impacts could well dictate its progress. Epson has just completed research to find out what European workers expect the impact of disruptive technology to be on business.

To do this, we interviewed 17 global experts and put their predictions and hypotheses to over 7,000 European business leaders and employees to help us understand how transformative technological trends are being perceived.

It’s clear that we’re at a tipping point. The majority of respondents expect that technology will be revolutionary in their industries within the next 10 years. At the two extremes, eight percent expect it to be completely revolutionary, and just two percent envision no impact at all. But if business is changing, how do European workers expect that change to manifest?

Diverse technologies will impact sectors in different ways, something recognised in the distinctive views highlighted in our research. Wearable technology was ranked highest of all the emerging technologies we screened for (including 3D printing, artificial intelligence, robotics and more). Wearables are positively viewed by 65 percent of European workers, with bio-printing and cobotics (collaborative robots) the least positively viewed, with 58 percent and 57 percent approval respectively.

This disparity could be explained by perceptions and experiences of the wider application of wearable technologies, where bio-printing is seen as more limited to the healthcare sector. Awareness of emerging technologies could also play a part, with 60 percent of respondents being aware of wearable technologies, but only 37 percent having heard of bio-printing. This highlights the challenge of adapting to new technology, understanding change, and preparing your business for it. 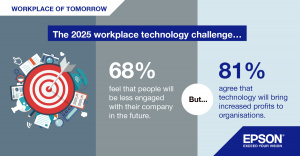 Adapting to the benefits

While adapting to new technology presents its own burden to business, with 59 percent of workers arguing it would increase operating costs, the case for doing so is stark. Seventy-nine percent of respondents acknowledged that technology would improve an organisation’s efficiency. That means a future where we are more time-rich and less constrained by traditional working days.

Technological transformation will also deliver profit according to 77 percent of respondents. The Internet of Things (IoT) alone has a potential global economic impact of up to US$6.2 billion by 2025 according to some expert predictions1. While the figures may be disputed, the significance is clear to workers.  Seventy-six percent of respondents believe that technology will open up new possibilities for growth, and 74 percent acknowledged that it would increase competition in their industry.

This is a time of change, and according to 81 percent of European workers surveyed, a transformation that will challenge the understanding of the traditional ways we work. Ultimately keeping pace with that change isn’t just about staying competitive, it’s about harnessing technology to unlock huge potential for future growth.