What Europe Thinks: How technology will Impact workplaces

Imagine a future where mass production is replaced by hyper-local printing, where the population utilises advanced technology to prevent illness in their own home, where virtual meetings take place through holograms as distant workers collaborate in the workplace of tomorrow. This future is far closer than we might think.

This vision of the future of work is not the realm of make-believe, but the reality that is emerging, as revealed by recent Epson research exploring the perceptions of European business leaders and employees of the workplace of tomorrow. Over half (57 percent) of the European workforce across industries including healthcare, education, retail, and manufacturing, believe industries and organisational models will be disrupted by technology, and 6 percent professed a belief that their individual roles will cease to exist within 10 years. So, is the future going to be bleak?

A positive look at change

Despite the huge disruption that technology is expected to deliver, the reality is that when 17 industry experts and futurologists shared their impressions on how technology could shape the future workplace, 64 percent of European workers expressed positive sentiment about the future they predict.

In addressing this challenge, organisations should be aware of the significant concerns held by workers. Overall 75 percent of those surveyed believed that technology would result in there being fewer employees. That figure varied substantially by country. Spanish employees were the most concerned, with fully 8 in 10 predicting a decrease in the workforce. German employees were notably least pessimistic, with 67 percent worried about this impact. Admittedly, with Spain currently suffering the second highest unemployment rates in the EU1, and Germany experiencing the second lowest, it is likely that the employment landscape could play some part in their relative optimism. 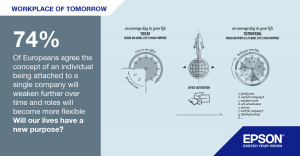 Variations by industry revealed an equally interesting trend. The manufacturing industry was found to be surprisingly optimistic, with 75 percent of workers anticipating a shift towards a more localised manufacturing model, and 55 percent anticipating that employment levels will remain the same or increase. Given the significant expected impact of 3D printing on manufacturing alone, this was an intriguing look at the positive perceptions of the workforce.

In education, however, respondents were less optimistic.  While expressing some concerns about the impact on knowledge retention as result of increased technology in education, concerns were also expressed about factors that could limit its introduction. Education workers perceived the greatest threats to future generations’ education lie financing, teacher training and outdated technology. In fact, 61 percent of education workers believe teachers were not equipped to train students with the skills they needed to use technology over the coming decade. We will explore this idea further throughout our series.

What do perceptions of European workers teach us? In many ways that we cannot be complacent, that change is coming and that accompanying it there seems to be real optimism for the transformation it will bring. The true question is can organisations deliver the positive benefits, and ultimately who will make themselves accountable for ensuring that they do?